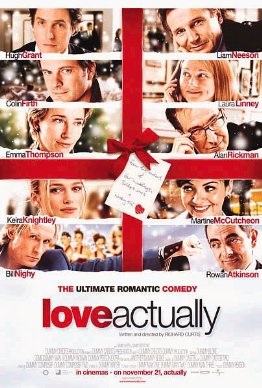 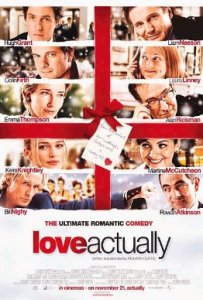 “Let’s go get the shit kicked out of us by love.”

The tagline of Love Actually boasts “Very romantic. Very comedy.” In my opinion, “very comedy” should have been left out – for the film seldom contains any laughs, and those that it does bring out from the audience are mere chuckles. There’s an overload of cheesy romance, however (and that’s saying something, considering that I generally love a good dose of corniness). In the end, there are some stellar performances from cast members that will warm your heart a bit, but these are overshadowed by director Richard Curtis’ pathetic attempt to follow too many storylines.

The beginning of Love Actually shows a scene at an airport gate, in which lovers and family members are exchanging various affections. The Prime Minister of England, David (Grant), narrates the scene, ending on the sentiment that “love actually is all around.” From there, the film branches off into ten different love stories, all slightly connected.

It’s hard not to feel warm fuzzies seeing Liam Neeson get all emotional with an eleven-year-old.

The small bit of charm that the film manages to obtain lies in some of the actors. Liam Neeson is absolutely endearing as Daniel, a man who mourns his recently deceased wife with his eleven-year-old stepson, Sam (Thomas Sangster). After his wife’s passing, Daniel is struggling to come to an understanding with Sam, who’s disconnected himself from his stepfather, until he learns that Sam’s strange behavior is due to the fact that he’s fallen in love with a classmate who doesn’t know he exists. It’s extremely heartwarming to watch Neeson eagerly attempt to assist his stepson, encouraging him in his pursuits of the young lady. He’s overall very convincing and likeable as a father figure. Another excellent performance comes from Emma Thompson as Karen, a caring housewife who gradually realizes that her husband (Rickman) is cheating on her. It’s heartbreaking to watch Thompson crumble under this knowledge, but then turn around and put on her happiest façade to protect her two children from realizing that anything is amiss. This particular situation in itself is all too relatable to many couples, who stay married and pretend that everything is alright for the benefit of their children. Thompson is absolute perfection in this role, somehow conveying that Karen is a victim while simultaneously showing the woman’s strength and bravery in her unfortunate situation.

The occasionally charming performances in Love Actually are just about the film’s only strength. Unfortunately, the film has a glaring flaw that severely overshadows this – Curtis is trying to tell too many stories. When audience members watch a movie, they should be able to easily remember the main characters’ names, and that’s not the case in this film. In fact, the way that the film so quickly jumps from story to story is disorienting, and it’s hard to even fully recall what’s occurring in each storyline, much less any of the characters’ names. This effects insubstantial character development, and ultimately results in the downfall of the film. Good romantic comedies tend to find success in the quirks and charms of the individual characters; the viewers need to be given characters that they can feel somewhat mentally contingent with. Curtis doesn’t give the audience these characters. On top of this, in the effort to connect all of the different love stories, each character is awkwardly inserted into at least one other romantic subplot. It feels unnatural, and it’s excruciatingly befuddling. Ensemble casts are a wonderful thing when they are used properly (Pulp Fiction, anyone?), but in Love Acually, a talented cast goes to waste because of its gross mishandling.

As I mentioned, the film has much more emphasis on romance than it does on comedy. The romance itself is somewhat terrible; either being downright depressing or unbelievably cheesy. For example, one of the romantic subplots sees a writer named Jamie (Firth), who’s left his girlfriend due to her recent infidelity, and his new Portuguese house maid (Lúcia Moniz) falling for each other. But, neither speaks a lick of the other’s language. Instead, the audience is forced to watch the two mirror each other’s every thought in their respective languages for a display of an inconceivable “connection”. This type of romance is absurdly insincere.

Curtis’ goal in making Love Actually is clearly to show that “love actually is all around.” While he technically achieves this concept through his plethora of subplots, it’s difficult to actually feel the emotion in each one due to a lack of development. Had some of the romances been eliminated, Love Actually would have had the potential to be a very warming and uplifting film. But, alas, this is hindsight.

Bottom Line: While Love Actually is not the worst romantic comedy in the world, the poor direction of the ensemble cast and Curtis’ feeble effort to shove together too many individual romances prevent the film from being any good.