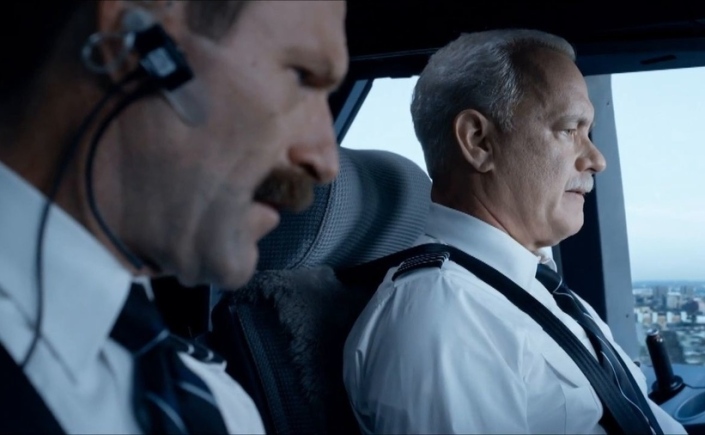 As those who have seen the trailers know, “Sully” tells the story of Captain Chesley Sullenberger and the emergency water landing of US Airways flight 1549 – which has come to be known as The Miracle on the Hudson, due to the fact that all 155 people on the plane survived the landing. The role of the revered Captain Sullenberger is a fitting one for Tom Hanks, who delivers the type of moving performance that we have come to expect from him. The story itself is an intriguing one, and serves as an ode to the United States’ rescue forces. Beautiful as that may be, the chronological layout of the film is the only drawback to an otherwise stunning work of cinema.

“Sully” isn’t by any means a play-by-play of the events behind The Miracle on the Hudson, rather it begins with Captain Sullenberger and his First Officer Jeffery Skiles (Aaron Eckhart) in New York City, just after the landing on the river. Sully is experiencing terrible symptoms of Post-Traumatic Stress Disorder; he’s unable to sleep and perpetually envisioning what might have happened to flight 1549, had events turned for the worse. Although nearly the entire country is hailing him as a hero, the National Transportation Safety Board (NTSB) is investigating the crash, claiming that Sully’s choice to land in the Hudson was reckless and unnecessary.

While the film doesn’t begin until after the crash, Eastwood still manages to show the entire ordeal as the second act of the film. The scene begins by forebodingly following the storylines of

different passengers, and of Sully, as they board flight 1549. Next, of course, chaos ensues, and Eastwood wisely doesn’t try to up the dramatic factor, but allows the organic tension of the situation play out. Things happen exactly as Sullenberger has described in interviews (like his appearance on “60 Minutes”), and his conversation with the air controller after losing both engines is spot-on – Eastwood even made sure to cast an actor with the same Brooklyn accent as the controller.

The only problem with the crash scene, and really the entire movie, is its chronological placement. Eastwood completely boxes “Sully” into the three-act structure: Act one, Sully is distraught in the aftermath of the crash; Act two, the crash and rescue efforts; and Act three, Sully’s hearing in front of the NTSB. The best way to use the three-act structure is subtly; the audience should never be conscious of the fact that the movie is divided into distinct thirds. In “Sully”, there’s a feeling of disconnect between each act, and the use of the three-act structure is glaringly obvious – and it’s an amateur mistake that Eastwood should be above making.

On a lighter note, Hanks’ portrayal of Sullenberger is faithful to the real life hero, and does him incredible justice. As usual, Hanks completely puts himself into the role, showing us the struggle that Sully endures during the landing, as well as the aftermath. While the press repeatedly calls him a hero, he refuses to accept it, insisting that getting every passenger to safety was “doing his job”. As for the actual crash, Hanks displays the same calm demeanor that Sullenberger was praised for. Although this type of role is nothing new for Hanks, it certainly fits him well, and he lives up to that golden standard that he’s set for himself.

What ultimately solidifies the success of “Sully” is its theme. The film includes the large number of first responders who were on the scene of the crash, transporting passengers to safety and providing them with medical care. Their presence, coupled with Sully’s mantra of “I was just doing my job”, is a tasteful, subtle appreciation of those whose “jobs” involve directly or indirectly saving lives. Amongst all of the action and superhero movies we see these days, “Sully” is a gentle reminder of the bravery in our everyday heroes.