American movie-goers and sitcom fans love a good dysfunctional family. It makes for some great humor, occasionally an emotionally satisfying confrontation of the family’s issues, and above all, lets the audience feel better about their own familial turmoil. “The Hollars” is second-time director John Krasinski’s attempt at such a movie, but it doesn’t accomplish any of those goals. Despite having a cast loaded with talent, the film’s poor direction and writing are its complete and utter downfall.

Krasinski also stars in “The Hollars”, as John, the son who moved to New York in order to distance himself from his crazy family. John is a struggling (largely due to a lack of faith in his artistic abilities) comic artist who is about to have a child out of wedlock with his girlfriend (Anna Kendrick), which he seems less than enthusiastic about. When his mother (Margo Martindale) is hospitalized with a large brain tumor, John rushes home to find that his family is as much of a mess as ever.

John is the most problematic character of the bunch, which is a bad sign given that he’s the protagonist. Those who were fans of Jim from “The

Office”, otherwise known as the character who rocketed Krasinski to fame, will immediately recognize John as being Jim’s annoying twin brother. John’s contribution to almost every scene is simply him reacting to something silly or outlandish with his signature “oh-my-god-these-people-are-crazy” look (pictured to the side). There is almost no exploration of John’s character; so when Krasinski attempts to give him a scene of reconciling his flaws, it fails miserably.

Another part of the problem is that too many broken characters are written in, and there’s only so much time for character development in one movie. Rather than pick one or two characters to explore with quality, writer James C. Strouse opts to provide a shallow and unsatisfying exploration of every member of the family. He also includes a cringingly sloppy subplot about John and his ex-fiancé (Mary Elizabeth Winstead) that the movie would have been much better without.

Krasinski can’t seem to decide whether he’s directing a drama or a comedy, for although the film labels itself as a drama-comedy the elements of each don’t mix together. The funniest scene is the one in which Mother Hollar finds out about the severity of her tumor. Here Krasinski takes what should be one of the most dramatic moments of the film and litters it with punch after punch of jokes. It’s hard to take the woman’s tumor seriously when her own family can’t even do so. When the film does decide to become serious about its content, Krasinski ensures that every cliché in the book is used. Prepare to spend the last 25 minutes of the film rolling your eyes nonstop. 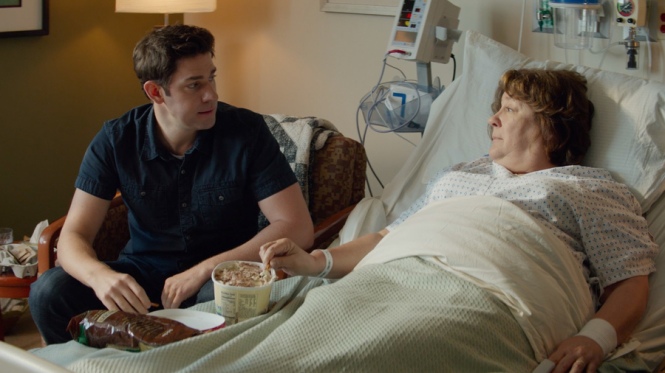 “The Hollars” definitively proves that direction is not the right path for John Krasinski. His instincts in the director’s chair are awful. Although he attempts to establish a theme, the characters are so underdeveloped and unclear in their motivations that any overarching message embedded in the film is lost in the disorganization. John, sweetie, it’s time to stop directing.