Three years ago Zack Snyder announced that a movie would exist in our universe in which Batman and Superman would be featured together, going head to head. People went nuts after this revelation and since then the anticipation has only been built up to a point that the movie couldn’t possibly live up to. The excruciatingly transparent marketing campaign, the horrendous writing and the downright lack of clear vision for the progression of the DC cinematic universe are only a few reasons that Snyder couldn’t make a better movie than he ended up making. You might wonder, how could something titled Batman V Superman be bad? Well, because, Zack Snyder happened to it.

While the Earthlings are struggling with the kind of hero they want Superman to be and determining if he is a threat to the planetary security of Earth or a saviour of mankind, Batman (aka the Knight of Gotham) decides to battle him and finally put an end to the destruction he has been causing on the planet. Simultaneously, Lex Luthor is pulling off shady machinations to further ignite their acute hatred for each other. It is up to both to bury their differences and fight hand in hand against the bad guys for the greater good. And Wonder Women is also in there somewhere. 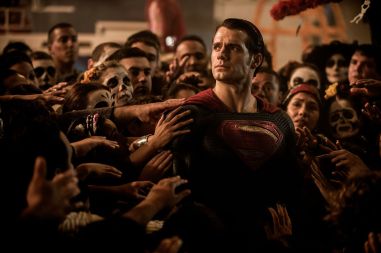 portions. The first half is a mature political satire with an espionage element adhered to it. The second half is crammed with the trademark Snyder explosions from every direction possible. It feels choppy with several irrelevant things happening incoherently, without a smooth flow of story and any significant character development. It takes a few interesting turns along the way but fails to carry them throughout the film. Out of nowhere another utterly unsubstantial subplot emerges and then the audience is forced to divert their minds from the current and a more interesting event to a completely irrelevant one. There are too many subplots and ideas that do not have any place in this supposed story of Batman and Superman. The almost two and a half hour run time is not excruciating to watch, but it certainly could have been used in a much better way – by replacing several unimportant story elements with more scenes where actual character development could occur.

This may be one of the most polarizing movies released in recent times. It tries to appeal to two utterly discrete shades of a person: the fan in you and the mature movie going audience member craving a solid story. It partially succeeds in bringing joy to the fans through its breathtaking visuals and the masterful duel between the two Gods, but it concretely fails to deliver a good story. The underlying ideas which form the nucleus of this story are fairly solid, but everything around it is, simply put, a hot mess. The darker tone most definitely suits the vision of the DC cinematic universe the creators are trying to build, but they take this notion too far, consequently making it no fun to watch at all (for the most part). It could have certainly used a little bit of humour and a lot less grimness.

Ben Affleck is, hands-down, the best looking on-screen Batman we have ever had. He looks the part and he certainly acts the part. He could have been a more interesting Batman if his morality was kept intact in accordance with its previous personifications. Granted Affleck’s Batman is older and has been in the vigilante game for over twenty years, Christian Bale’s Batman was more vulnerable but still had a strong moral compass. A similar moral dilemma would have made Batfleck a significantly more relatable character. Henry Cavill is exactly as he was in Man of Steel: a very good Superman. The lack of novelty in his character is clearly visible. Gal Gadot do not have much to do as Diana Prince but she kicks some serious ass as Wonder Woman. She looks absolutely incredible and is now evidently, a great choice to play the Amazonian warrior in future movies. Jeremy Irons is a great Alfred and positively different from any of the other representations we have seen of him. He is not just an emotional guardian to Bruce, he is a tech-genius who builds his armour and other inventories. His relationship with Bruce is amusing to watch. Lois Lane, played by Amy Adams, struggles hard to make herself relevant to the story. She fails epically, just as Alexander Luthor played by Jesse Eisenberg does. The intimidating villain is portrayed as an obnoxious person without any clear motivation for the things he is doing. Just as the entire humankind suspected – he turned out to be a complete miscast to play the iconic role.

Ultimately, Batman V Superman: Dawn of Justice is an amazing looking mess. It is a missed opportunity since the masterful visuals and style of the movie could not mask the weak story. It has some glorious moments and it has a lot of incomprehensible moments. Hope that the next instalments in the DC cinematic universe( i.e. Justice League: Part 1 and Justice League: Part 2) also helmed by Zack Snyde do not turn out to be style over substance.