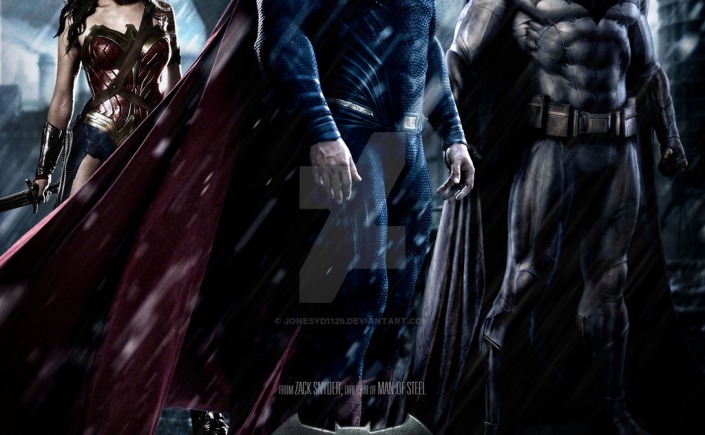 The plot of the long-anticipated DC blockbuster is slightly reminiscent of the brief opening subplot of Pixar’s The Incredibles: Should superheroes be held accountable for the damage they cause? Are they really the heroes that they claim to be? Dawn of Justice takes it a step farther (well, at least it tries to), bringing up the problem of deifying heroes – Superman, more specifically. Zack Snyder never actually solves this problem, nor does he keep his plot together in the film. The movie attempts to distract from the fact that it’s falling apart by bringing in unnecessary and barely relevant characters from the DC Universe. Oh, and of course, lots of special effects.

Batman vs. Superman starts out strongly enough with an introduction to the Bat’s origin story, and then a retelling of the final events of Man of Steel, through Bruce Wayne’s (Ben Affleck) point of view. This is actually done wonderfully, despite the scene dragging on a bit. It’s difficult to imagine Superman – a hero that everyone has trusted and loved since his conception – as a villain, so seeing the hero using the Metropolis as a battlefield through Wayne’s horrified eyes is a masterful use of perspective. After this, things make a turn for the worst, as Snyder tries to weave convoluted subplots together. Somewhere, Kryptonite is discovered. Somewhere else, Lois Lane (Amy Adams) ends up in a sticky situation that endangers her life and causes superman to intervene, resulting in enough casualties that the implication of Superman being a criminal is brought up again. Snyder continues with his disjointed subplots, and the audience gets to play a frustrating game of “How does this contribute to the story?”

Fortunately, Snyder does know how to make a lovely looking piece of cinema, save for the CGI monstrosity “Doomsday” that everyone has seen in the teasers. The action scenes will satisfy all fans of the genre, as they are beautifully choreographed and entrancing to watch. The movie works hard to ensure that all of its symbolism gets through to the audience, grossly overdoing it. In fact, more time is spent trying to

enforce the symbolism of Superman as a god than it is developing the theme of the morality of idolization. These failings comes as no surprise, with the primary laudation of Man of Steel being its grand spectacle. Film critics and fans know by now that Snyder can create visual masterpieces; what would really “wow” us is if he actually accompanied these sequences with a worthy plot.

When it was announced that our beloved Dark Knight had been recast, I was skeptical to hear that Affleck would be taking on Christian Bale’s former role. Luckily for us, the new Bruce Wayne is a pleasant surprise. Despite the fact that Snyder chooses not to explore the character further, Affleck does a fantastic job with what he’s been handed. Other cast members leave something to be desired, namely, Jesse Eisenberg as Lex Luthor. A common description of Luthor’s character in the DC universe is of a sophisticated man with unparalleled intellect. Eisenberg seems keen on turning the character into an utter lunatic. The best thing that can be said about this unworthy villain is that Hans Zimmer composed an intriguing theme for him that pays appropriate homage to John William’s 1978 Superman score.

The reason that Batman vs. Superman is being so eagerly consumed by audiences is because they like the idea of it. They like seeing random appearances of the Flash, Aquaman, and Cyborg, because these cameos promise more familiar DC superhero films to come. All in all, Marvel is still dominating the genre of the superhero film, and rubbish like this is barely even competition. Obviously excluding The Dark Knight trilogy, DC films all around have done nothing to enliven or better cinema. Dawn of Justice is another huge step in a completely backwards direction.