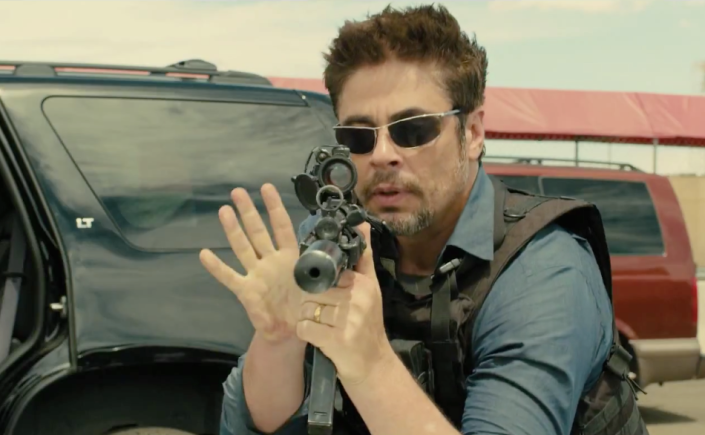 In Mexico, SICARIO means hitman. In the lawless border area stretching between the U.S. and Mexico, an idealistic FBI agent [Emily Blunt] is enlisted by an elite government task force official [Josh Brolin] to aid in the escalating war against drugs. Led by an enigmatic consultant with a questionable past [Benicio Del Toro], the team sets out on a clandestine journey forcing Kate to question everything that she believes in order to survive. A Lionsgate presentation, a Black Label Media presentation, a Thunder Road production, a Denis Villeneuve film.

With all of the rave reviews, the action-packed trailer, and the thrilling subject matter, I was really looking forward to seeing Sicario. Unfortunately, I’ve been let down. Villeneuve focuses so much on making specific points that he forgets about entertaining the audience. The screenplay, which was done by Taylor Sheridan is disappointing, to put it simply. Despite these blunders, what Sicario lacks is reconciled by some stellar performances and an ineludible theme. 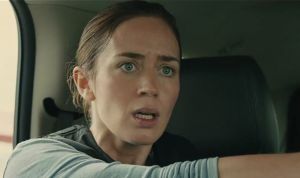 The first downfall of the film comes with the female lead, Kate Macer (Blunt). I was thoroughly excited for her, because I’d gotten the impression that Sicario would be driven around her – she would be the strong, hard-ass, female lead that me and the rest of the women in the world had been waiting for. Instead, she’s a withdrawn follower whom the audience has to watch get pushed around. It’s evident that Villeneuve wanted to paint Kate as a fish out of water, but he goes too far, and she turns out being a fish stuck in a tree that’s just had its fins chopped off. Make no mistake, this no fault of Blunt’s. She does what she can with what she is given; which is very little. The writing and the plot favor Benicio del Toro’s character, Alejandro Gillick – the mysterious consultant whom the actor fits very well. Alejandro initially seems harmless, but as the film progresses the audience is exposed to the reality of his cruelty. Although the amount of focus on del Toro’s role severely deprives Blunt’s character of any chance to shine, this makes Alejandro a well-written and deeply stirring character.

The root of some of the film’s issues is the script, written by novice Taylor Sheridan. Sicario is the first film that Sheridan has written for – so I’ll try to go easy on him – but it’s not great.   Parts of the dialogue are clunky – phrases like “you’re not American” sound awkward and a scene in which an entire conversation is had about Kate’s bra seems completely irrelevant. Also, the film is paced very strangely, and not in a good way. The opening scene is tense, with Kate and her partner bursting into a house on a kidnapping raid, the walls of which turn out to be lined with corpses. After this scene has gotten our adrenaline pumping, things slow down significantly, and save for a couple of shooting scenes the story gets slow. This proceeding is furthered by the fact that a lot of time is spent on establishing the fact that the location is Juárez, and it’s a dangerous place. The first time that the camera pans out on the arid desert of a city, it’s fantastic – a beautiful shot. However, many more similar shots and the repeated warnings to Kate from the team about the threat Juárez holds produce a general sentiment of “we get it; they’re in Mexico.” The plot would’ve flowed much more had this repetition not been causing such a distraction.

Though the action scenes in the film are sparse, Villeneuve makes each one with distinction. The graphic images that are shown are terrifying and unforgettable, often accompanied by a bizarre melody of growling low pitches (hats off to Jóhann Jóhannsson for the score). Even the opening scene is effective – try getting the image of a house lined with corpses out of your head. You won’t necessarily be on the edge of your seat during the film, but Sicario does leave an impression, and I’m certain it’s inspired many audience members to learn more about its delicate subject matter. Sicario is a film that aims to point out the effects of the drug trade on people who may or may not be involved with it. Ultimately, it achieves that goal, and despite my dilemmas with the film I think it’s still an important watch.