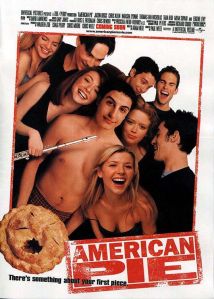 The first time I saw American Pie was when I was twelve – it was the first unrated movie I’d ever seen, and a vast majority of the jokes went over my head. So, when I saw this gem under “Recently Added” on Netflix the other night, I had to give it a go. Fortunately, being older (but probably not wiser), I was able to fully appreciate the humor this time around. Many have noted that American Pie has a few blatant errors to it, but given the brash humor and the scarily accurate depiction of the pressure to have sex in high school, these mistakes are forgivable.

American Pie tells the story of four seniors in high school (more importantly, they’re virgins). Jim Levenstein (Jason Biggs) can’t seem to even speak simple English when he’s near an attractive girl, and lacrosse player Chis “Oz” Ostreicher (Chris Klein) discovers that he doesn’t have the moves he thought he did when he fails in an attempt to seduce a college girl. There’s also Kevin Myers (Thomas Ian Nicholas), whose girlfriend (Tara Reid) won’t have sex until the right time, and the sophisticated but brainy Paul Finch (Eddie Kaye Thomas). When Chuck Sherman (Chris Owen), the nerdiest kid in school has sex, the friends decide it’s time to put an end to their infelicitous celibacy. The four of them form a pact: to lose their virginities before they graduate high school – which proves to be just as difficult a task as it was before the agreement was made.

Generally, the creation of a film is attributed to its director, but in this case, writer Adam Herz deserves the largest chunk

of credit. He developed the idea for the film and the title scene through the idea that losing one’s virginity in high school is “as American as apple pie.” The running pie gag throughout the film is only one example of the comedy Herz writes. Although many of the punchlines aren’t necessarily laugh-out-loud material, they are memorable, if nothing else. In fact, while watching the film, I recall several times wanting to write down a certain line because it was so great. The antics in the film are outrageous, and almost but not quite unfathomable. There’s a lot of slapstick and cringe comedy in American Pie, and that type of humor definitely doesn’t appeal to everyone. But, from the viewpoint of a young woman in college; making fun of teenage boys’ sex drives and the pressing urgency of losing one’s virginity at that age is just hilarious.

Something refreshing about this film, as compared to other high school films, is the lack of an antagonist. It’s just a group of friends on a mission to lose their virginities, with no petty bully fighting them every step of the way. Also, the friends don’t fit into a specific high school category. Sure, Jim is dorky, but there’s also Oz (Chris Klein), who plays lacrosse. Each “participant” in the pact has distinct features about him, but the characters don’t turn into boring echoes of similar characters in past movies. That’s not to say that there are no high school stereotypes – but the typical characters like Stifler (Seann William Scott), the asshole jock, are used satirically. The supporting roles in the film are also stellar, with particular recognition going to Eugene Levy as Jim’s father and Alyston Hannigan as Michelle Flaherty, band geek. Levy is the perfect blindsided father who always ends up in the wrong place at the wrong time – and never fails to deliver a hilarious awkward reaction. If any one member of the ensemble cast stands out as the star comedic of the film, it’s Levy. Michelle Flaherty (I’m 99% sure) is the reason that the words “band camp” now have sexual connotations for teens. And, of course, Michelle provides the wonderful realization that even nerdy girls like sex. 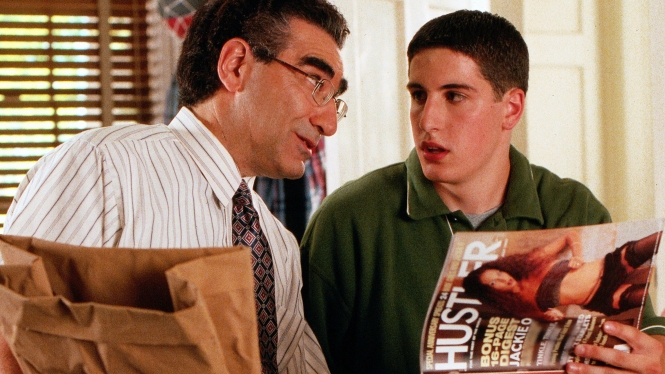 Although the characters in American Pie are enjoyable and unique, the plot isn’t so much so – as they make the pact, it’s quite obvious that the boys will either learn a valuable lesson or lose their virginities by the end of the film. Fortunately, the path towards this conclusion is lively and different enough to divert from this fact.

Seeing American Pie will make everyone remember their time as a virgin, and find themselves thinking “Oh my god, that’s so true,” repeatedly throughout the movie. With the right sense of humor, anybody who is (hopefully) over the age of seventeen will find this film a modern comedic classic.