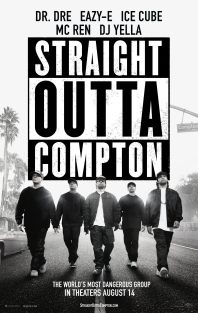 For those of us living in relatively peaceful areas in 2015, it may be hard to imagine what life is like for people who live in crime-ridden neighborhoods. F. Gary Gray’s biographical drama, Straight Out Of Compton, provides a troubling but honest look into such neighborhoods. By following the formation and rise to fame of the hip-hop group N.W.A., known for its violent lyrics, Gray shows the influence Compton has had on gangsta rap. Straight Outta Compton is an essential film to watch, and a memorable victory for F. Gary Gray.

Dre (Corey Hawkins) persuades his friend Eazy-E (Jason Mitchell) to begin the record label Ruthless Records, using the money he has earned through selling drugs. The two are joined by Ice Cube (O’Shea Jackson, Jr.), who writes “Boyz-n-the-Hood” for Eazy-E to rap, beginning the group N.W.A. (if you want to know what that stands for…google it). Jerry Heller (Paul Giamatti), a music manager, recognizes the potential of the single and approaches Eazy with an offer to represent him. After a show, Priority Records offers them a contract, through which N.W.A. produces its first album, Straight Outta Compton, propelling the group to fame. 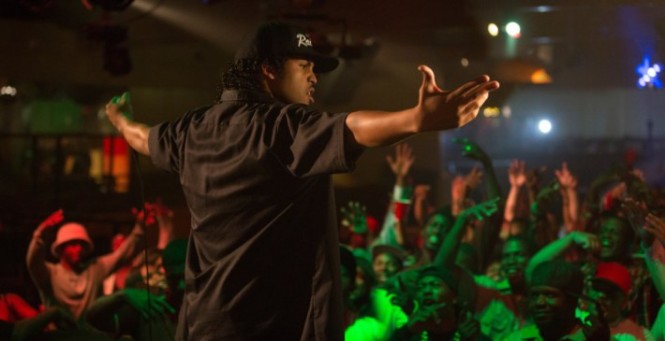 Ice Cube during one of N.W.A.’s early performances

I really must applaud the casting and the acting in this film. As I’m sure everyone one is aware, Ice Cube is played by his own son. Jackson is the spitting image of his father, particularly during the middle to the end of the film. It’s not just in physical appearances, either; Jackson also replicates the tenacity that Ice Cube has become known for. What makes his performance even more impressive is that he has had no prior acting experience, making it quite brave of him to jump into a lead spot. However, Jackson’s novice doesn’t show, and he does an incredible performance. Eazy-E, Dre, and Jerry Heller were also very well cast, with Heller especially portraying the perfect music industry business man. Gray shows the individual character storylines, as well as the progression of the group as a whole so that the audience gets quite attached to the characters. This, and the superb acting, allows for some of the most heartbreaking moments of the film, which is a key part of Compton’s success.

Compton has a deep level of authenticity to it, something that comes from objectivity of the film at many parts. Gray allows the audience to see police brutality and biased treatment of N.W.A. because of their race. However, he also includes times when the group slips up. Gray doesn’t eliminate the fact that Eazy-E is a drug-dealer, and he includes the rioting that the rap group causes, as well as terrible things that individual members do. Although the corruption of the police that’s shown in the movie is so astounding beyond measure, Gray does not try to make the group into victims. He paints N.W.A. as the voice of victims, which is all it aims to be. However, a drawback to the film: there are a few parts that are not true to the real story. Normally, in a biopic this would be okay – sometimes you do need to change the story a bit for effect. But in Compton’s case, the occasional changed story makes you wonder what other parts of the film aren’t completely true. The slight bit of doubt that arises from the situation can make the cop scenes less powerful and less believable. Although the overall presentation and storyline of the film is superb (despite being 2 and a half hours long, it flows so well that the length is hardly noticeable), I think that the original story should have been left as it was.

As a director who mainly does music videos, F. Gary Gray has really created something to be proud of. Straight Outta Compton will speak to all, even those who aren’t familiar with N.W.A. or hip hop in general. Original, moving, and staggeringly honest, Straight Outta Compton is a tribute to N.W.A. and gangsta rap that fans of the group and genre will find to be more than worthy.