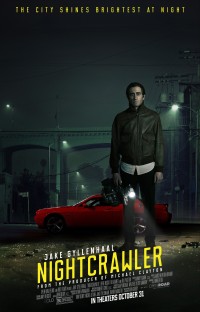 I’m not too familiar with a lot of Jake Gyllenhaal’s work, but apparently I’m missing out. In Dan Gilroy’s directorial debut, Nightcrawler, Gyllenhaal channels an unsettling charisma as Louis Bloom, a terrifying man who takes up the work of filming crime to sell to news channels. Gilroy also writes a superb screenplay for the thriller, which is a real nail-biter, although in a different way than most other films in the genre. Nightcrawler is perfectly paced, somewhat horrifying, and features Jake Gyllenhaal at the top of his game as an actor.

Lou (Louis, as he frequently reminds people in the film) Bloom (Gyllenhaal) is an ambitious but out-of-work man living in L.A., forced to take to the streets in search of jobs he can use to scrape by. One night, he happens upon a bloody car crash, and witnesses a freelance cameraman (Paxton) capturing footage of the scene to sell to news networks. With his interest now piqued, Lou pawns a stolen bicycle in return for the bare essentials in the nightcrawler trade: a basic video camera and a police scanner. Armed with this new equipment, Lou begins to scour the streets for footage, daring to get up close to bloody scenes. The news director of the lowest rated local station, Nina (Russo), is intrigued when Lou brings her his first graphic video, and she advises him to get better equipment. He’s also given a guiding principle from her on what he is to capture: “A victim or victims, preferably well-off and/or white, injured at the hands of the poor, or a minority.” Lou enlists the help of Rick (Ahmed), a young man willing to do anything for money. Using Rick as an apprentice of sorts, Lou becomes a powerful stringer, stopping at nothing to get footage that will sell.

Nightcrawler is certainly a thriller; not necessarily the ordinary thriller that contains jump scares, but one that is full of restless tension. The audience is trapped in a state of wonder, knowing little about Lou’s background and being consistently shocked by the lengths he will go to be successful. Gilroy does great direction as well as writing for the film, initially painting Lou as the protagonist, but gradually revealing him as a terrifying sociopath. The plot is also quite surprising. It’s obvious to everyone that Lou will have to receive some sort of consequence or retribution for doing what he does (I don’t want to go too deeply into the lengths he goes), but what’s decidedly uncertain is which form karma will come around in.

Jake Gyllenhaal is the clear star of Nightcrawler, and his character is truly a masterpiece. Gyllenhaal lost about thirty pounds for this role, and it’s clear that he is physically and mentally dedicated to being Lou Bloom in the film. The weight loss is very clear in his face, and his eyes creepily bug out so that he looks to be constantly watching and calculating. Even his posture is very passive, shoulders slouching, almost reiterating the fact that he is there to observe and not to intervene. Lou is just an extremely fascinating and well-written character (well done, Gilroy). Although he struggles financially and starts out as a petty theft, his attitude and his vocabulary are extremely sophisticated. The tone of his voice is nearly always very measured and controlled, and I’d even dare to call it somewhat soothing. The combination of all these character traits makes Lou seem almost like an alien, and from his actions in the film he certainly can be called inhuman.

Gilroy has created a very unique story, and it puts the morality of the media into question – something that we often forget to consider. He sends the audience a reminder that news networks choose what they broadcast; most news channels are never going to show the stories that accurately represent the world. As Nina says in the film, “if it bleeds, it leads”. Some people have argued that Gilroy’s message takes too many blatant stabs at the media, but I disagree – his motive is merely to show what may happen should we fail to recognize that certain news sources show their audiences a warped view of what’s going on in the world. The content in Nightcrawler, including the criticisms of the media, is all very thought-provoking – a huge part of the film’s appeal.  If this film is any indication of Gilroy’s future as a director and writer, I will most certainly be looking forward to his coming projects.