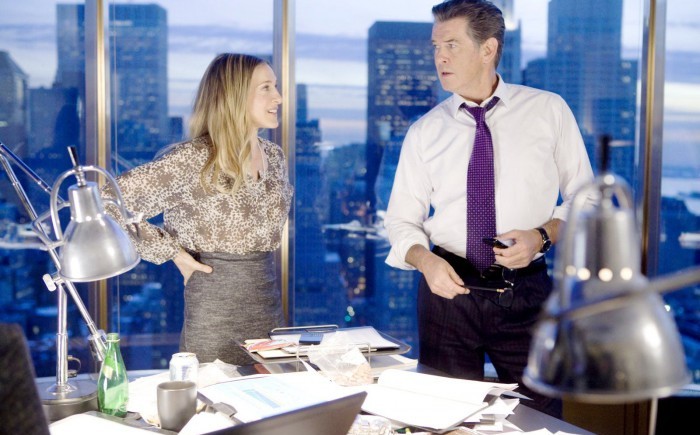 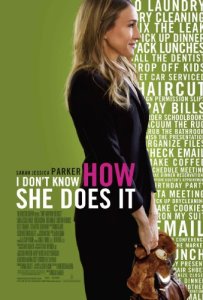 Last year, I watched Douglas McGrath’s Emma (1996) and was steadily bored to tears. I don’t know why I would’ve expected better from I Don’t Know How She Does It; although I’ll say that this film saw me as more annoyed than bored. Starring Sarah Jessica Parker, Pierce Brosnan, and Greg Kinnear, I Don’t Know How She Does It (which shall henceforth be referred to as IDK) is based on a novel by Allison Pearson. The film moves slowly and unsuccessfully attempts to make a “bold” statement about women in the workplace.

Kate Reddy (Parker) is a finance executive who has two children with her husband, Richard (Kinnear), and struggles to balance her work and personal life. When Jack Abelhammer (Brosnan), an important client, decides to take on her most recent proposal, she finds herself with even less time. And this is the simplistic, boring premise of IDK.

A woman being the family breadwinner is not exactly a rare thing nowadays, nor was it in 2011, when the film was released. There are so many women who both work and raise kids – heck, I know women who have two jobs and successfully take care of their children. I’m not arguing that it’s easy, but it certainly isn’t the Herculean task that Pearson and McGrath are trying to make it out to be. So, as a result, we have an abysmal plot that attempts to be exciting with an unconvincing scandalous subplot. Brosnan’s role as Jack Abelhammer has him being a temptress for Kate, but it goes nowhere and is ultimately irrelevant. 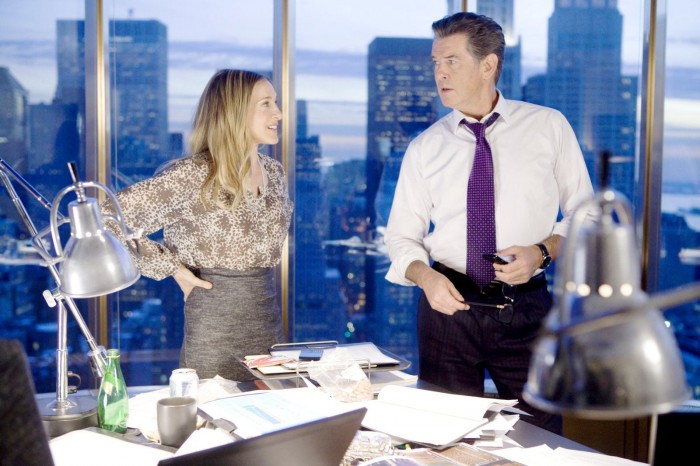 It’s obvious that IDK is supposed to be a feminist film, but it pushes past that and goes into borderline female supremacy in suggesting that women are the only ones with problems. I found the adversity that Kate faces with her male coworkers to be unconvincing. It may have passed as believable if the film had come out in the 1970’s, but in 2011 the playing field is much more even (although admittedly still not completely level) and women just don’t face the discrimination that McGrath suggests with this film.

Furthermore, the film contradicts itself. Kate goes on and on about how hard it is to be a mother and working, and how mothers deserve more respect. However, she criticizes literally every other woman in the movie. The mothers who don’t work are labeled “Momsters”. The women that work and do not have children are cold. According to Kate, every women who has her life the least bit put together is a problem. Not only does this contradict the so-called feminist tone to the film, but it also reinforces the stereotype that women are hateful towards one another.

Don’t be fooled by the fact that I Don’t Know How She Does It is in the comedy category on Netflix – it’s drab. The plot is just flimsy and the messages are backwards. If you’ve never heard of the film, I promise that you aren’t missing out.

Fun Side Note – Reel Red Reviews is now operating on a 5-star scale, as opposed to 10-star!