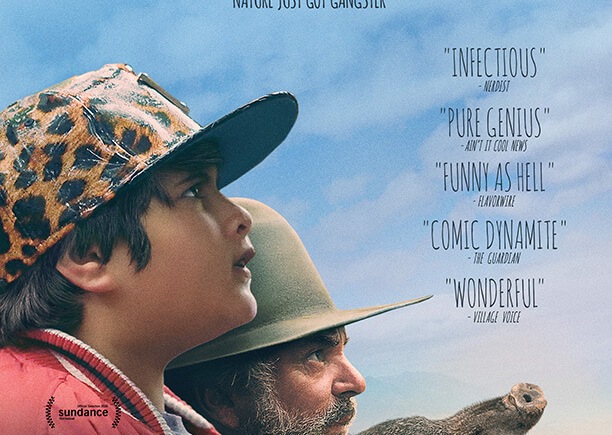 Thug life has never been so endearing as it is in “Hunt for the Wilderpeople”. New kid on the block Julian Dennison and “Jurassic Park”’s Sam Neill make an adorable pair in this unique comedy-drama, as they traipse through the wild bush in New Zealand. Everything about this film is stellar, including the performances, the storyline, and the direction. Even those who normally don’t seek out indie films should see “Wilderpeople”, because it’s wholly one-of-a-kind and wonderful.

Ricky Baker (Julian Dennison) is the most gangster young fellow in all of New Zealand – he’s not afraid to spit, break things, or even (gasp) loiter! Ricky has been bounced between different foster homes and juvie, until he lands with a pair of strange foster parents, Aunt Bella (Rima Te Wiata) and the begrudging Uncle Hec (Sam Neill). Just as he’s started to settle in and love Bella, her untimely death upsets the situation. Paula, the “No child left behind!” social worker (Rachel House), deems Uncle Hec unfit to raise Ricky alone, and comes to collect orphan and return him to a group care home. Repulsed by this idea, Ricky flees into the vast bush, with Uncle Hec hot on his tail. Not knowing what to think, Paula believes that Hec has abducted Ricky, and so begins a national manhunt for the “pervert” and the “bad egg”.

At the heart of this movie’s success are two great characters, played by great actors. Ricky is a dedicated hip hop fan, and even names his dog “Tu-Pac”. Much of the comedy stems from his naiveté, which is well acted by Dennison, who seriously nails Ricky down to the tiniest facial expression. Neill is at home in the slightly cliché role of the gruff, heartless old man, but the on-screen chemistry between him and Dennison helps his character surpass the archetype. The praise is due for more than just these two actors, though, because every single character – down to the smallest supporting role – is a wonderful addition to the story. Aunt Bella’s quirky positivity (and her amazing serenade for Ricky’s birthday), Paula’s freakish determination, and Psycho Sam’s pride for his bush-man costume all add together to make a dry-humor film full off nonstop laughter, and some excellent pop culture references to boot.

Waititi has truly outdone himself in the direction and writing of this film. The dialogue is fresh and hilarious, developing the characters so subtly that it’s not at all noticeable – until halfway through the movie you realize how much you care about the people on the screen. The pacing is also expertly done, making the plot easily pass along. “Wilderpeople” is a movie that keeps you so engaged, you will be unaware of the passing of time, until you suddenly notice it’s nearly over and feel a pang of disappointment – because you don’t want it to be over.

The journey of two reluctant companions is not a novel concept, but it feels fresh in “Wilderpeople”. As soon as Hec and Ricky end up stranded in the bush, glaring at each other through narrow eye, it’s obvious that they will grow to care for each other as the plot develops. Sure enough, that’s exactly what 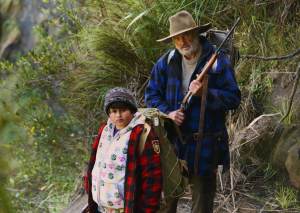 happens, but Waititi provides enough surprises in other ways to compensate for this. The ending itself is unexpected – coming on screeching wheels out of nowhere – but it’s satisfying. Often, the happiest ending is the predictable one, but Waititi has bargained to deliver a conclusion that is emotional and a bit heartbreaking, but also uplifting, which is another feature that sets “Wilderpeople” apart.

New Zealand definitely is not known for cinema; the “Lord of the Rings” series put it on the map, but that’s about it. However, the country should certainly be proud to having Waititi representing it, because he has proven his mastery in writing and directing. Waititi is also directing the next “Thor” film; it will be interesting to see how the movie adds to his resume, especially considering how much the genre contrasts with that of “Wilderpeople”. Until “Thor,” though, be sure to see “Wilderpeople” as soon as you have the chance, because it’s a movie that you really cannot miss.