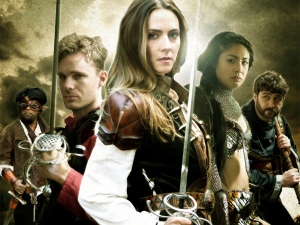 We all know somebody who takes gaming so seriously that he gets sucked into the game; and of course some of us know that we are that person. Peter Hayne’s web series, AFK, follows six people who become physically sucked into an RPG game (modeled after World of Warcraft). Although setting a story in a virtual reality is not a novel concept, Hayne’s manages to rethink it into a fantastic twelve episode web series.

Web series have most often succeeded as comedies – given that episodes are usually less than fifteen minutes, there’s not enough time to develop a dramatic plot in each installment. That’s why it’s so impressive that Haynes creates tension in AFK. Each episode for the series is around ten minutes, and the fact that the episodes aren’t a smidge longer is AFK’s only transgression. The series finds its biggest strength in a plot heavily centered around fascinating characters, rather than the greater situation. That’s not to say that the “what” and “how” of the players’ dilemma is ignored, but it’s sidelined while the series focuses on developing individual characters as they fight for their own survival.

The characters are truly brought to life by some amazing costume designers and a fantastic cast. Save for a glaringly obvious fake beard, the casts’ costumes successfully add a level of authenticity to their parts, as well as contribute to the establishment of the gaming world. Mia Pistorius plays Q, a player trapped as an Elf who is unwilling to divulge much about herself and arises as a leading figure for the players. Pistorius brings a fiery tenacity to the role, and is well-suited in winning the audience’s affection. Another notable lead is Ravi Narayan, who is tasked with playing Maybel, a woman who is trapped in the body of a male gnome. Narayan does a spectacular job conveying the feminine qualities of Maybel, while taking care to not overdo it.

Yet another reason that AFK’s first season is such a success is the thematic development that Haynes is able to include, despite the time limitations. The director touches on a lot of themes that are obvious for the plot, like survival of the fittest, trusting strangers, and human kindness to start; but he also goes out of his way to address sexism and misogyny through the characters Maybel and Stevie. As you’ll recall, Maybel is a female who chose to play the game as a male. Stevie on the other hand is a guy’s guy who’s ended up trapped in the body of an attractive young woman. Maybel notes that she’s chosen a male character because she wanted to avoid being hit on all the time, while Stevie experiences the feeling of being powerless in his female character’s body. These are important moments that Haynes includes, addressing the vital social issue of rape culture, and they separate AFK as a unique and meaningful web series.

Those who are unfamiliar with the world of online gaming may worry about feeling lost in the plot of AFK, but that’s not the case here. This is a web series that anyone can enjoy, with strong, likeable, characters and an engaging plot that’s sure to draw the audience in. Be sure that you’re on the lookout for the second season of AFK; I know I’ll be!

For more information, or to watch AFK, visit the show’s website!