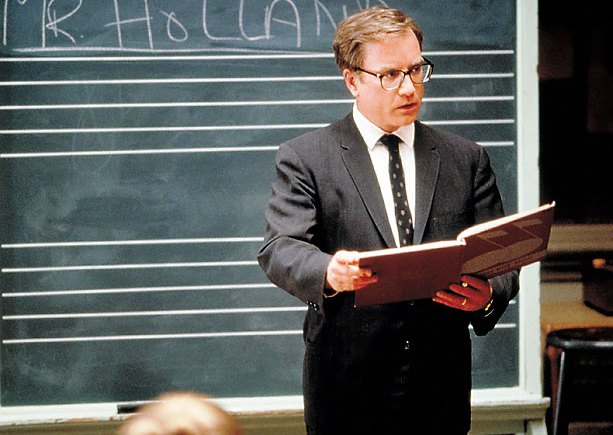 Middle and high school arts teachers are surely the most underappreciated educators out there. Anyone who’s been in one of the programs, whether it be band, chorus, orchestra, or drama, remembers their teacher – because these are the teachers that have the greatest impact on students. Mr. Holland’s Opus is a film that explores the teaching career of such a teacher, resulting in a heart-wrenching drama that provides a salute that all dedicated arts teachers deserve.

There’s more to protagonist Glenn Holland (Dreyfuss) than being a high school orchestra director; he’s actually a fairly successful musician, but he takes the teaching job as a way to be able to work on composing his masterpiece and spend more time with his wife, Iris (Headly). The film follows Mr. Holland throughout his teaching career, which lasts roughly 30 years, beginning in 1965. But, the path towards creating his opus is rocky, and the audience sees him through both happiness and tragedy.

marital life. Sometimes, his two separate lives tend to line up or contrast very poetically. Shortly after the birth of his son, Cole, Mr. Holland learns that his son is deaf, which leads him to lecture his class on Beethoven, the famed composer who became deaf towards the end of his life. Director Stephen Herek subtly enforces the parallel with a scene in which a four or five-year-old Cole sees his father directing his orchestra in a rehearsal, then closes his eyes and pretends to direct along with Mr. Holland. After Mr. Holland stops directing the piece, his son is still going – he can’t hear that it’s ended – and it’s reminiscent of the fact that Beethoven had to be physically turned around to see the audience clapping at the premiere of his world symphony. This is the moment that it dawns upon Mr. Holland that he’ll never be able to share his love of music with his son. It’s heartbreaking moments like these in which Dreyfuss truly shines in his role. As the film progresses, the audience can see Mr. Holland growing farther apart from his wife and son, in favor of spending more time with his students. Dreyfuss excels in showing how out of place Holland begins to feel at home, but switches on a brilliant glow that the teacher radiates whenever he’s instructing his students.

The film becomes a documentation of Mr. Holland’s struggle to bring the things that he loves – music, his wife, and his son – into one place. This theme is conveyed quite superbly, both in the performances and in Patrick Sheane Duncan’s writing. It’s also remarkable how Duncan manages to develop this tension in Holland’s family without straying too far from conveying the impact of Holland as a teacher on several of his students. Unfortunately, Duncan has bitten off more than he can chew in trying to detail Holland’s entire thirty year career as a teacher. Because he’s trying to include so much, the initial scenes of the film in which Holland is getting into the rhythm (I love puns) of his teaching job almost feel like they belong in a different film than the middle to the end of the movie. The tone just changes a lot, and Herek struggles to streamline the moods without any seams.

Bottom Line: Mr. Holland’s Opus is a hugely uplifting film that, by the ending, will have all the sappy women in the room sobbing their eyes out. The movie is a tad long for a drama, but don’t let that scare you off, as it’s well worth it.

Be sure to listen to me and Peter talk more about Mr. Holland’s Opus on his wonderful podcast, Hydrate Level Four. You can catch his podcast on PodBean, iTunes, or Stitcher. Don’t forget to follow the show on twitter: @HLFPodcast.