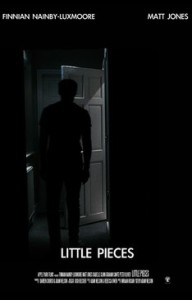 Synopsis: Little Pieces is the story of Michael and Eric, two young men on a collision course with the world around them. As they race violently towards each other their world comes crashing down, changing their lives forever. Finnian Nainby-Luxmoore, Matt Jones, Isabelle Glinn, Graham Cawte and Peter Oliver star in this story of love, violence, reconciliation, and family, in which all the pieces matter.

The original pilot episode for the popular television show It’s Always Sunny In Philadelphia was shot with a digital camcorder on a budget of $85. I personally didn’t think it was very good, and neither did most of the production studios that it was submitted to. However, FX saw potential in the show, and now the show has just finished up its tenth season (and I’ve become a huge fan of it). Obviously, this story is unrelated to Little Pieces, but I merely would like to use it to point out that everyone/thing successful had to start somewhere. I believe this is the case with Adam Nelson and Little Pieces, his first feature film. The concepts Nelson has put into the making of Little Pieces are good ones, but unfortunately the film fails to reach its full potential, often due to the time and budgeting constraints.

This story starts out slowly; the first half is admittedly difficult to get into. You don’t know anything about the characters, you mainly see them strutting around and brooding. It seems like an attempt to build tension, but it’s way overdone…so many shots of an angry man running around gets tiring. That being said, as the film progresses into its second half, Nelson begins to reveal more about the characters and that makes it much easier to care about them. Almost all of the acting is quite good, with Isabelle Glinn as Cheryl being the clear star. Glinn has a gentle air, one that keeps the audience engaged and invested in her character. This feat is even more impressive, given that Little Pieces is the first feature film that she’s acted in. But then, there’s Jerry (Peter Oliver), and I don’t know who to blame for his awful character. The dialogue that Jerry has, just in itself, sounds terrible, and it’s not aided by Oliver’s gruesome delivery.

Nelson’s intention in Little Pieces is to tell a story in fractured pieces, rather than simply building to a climax. The problem in this situation is that the pieces presented are too fractured, and it’s difficult to piece anything together at all. Non-linear storytelling is a wonderful device that, when done well, produces a fantastic overall product. However, in this case, there is missing connectivity in the storytelling, and it isn’t found until too late. Alas, the non-linear tactic becomes too disorienting for the audience to benefit from it.

The cinematography for Little Pieces is quite nice, and somewhat reminiscent of the stylings of Tarantino. Nelson gets artsy with his camera angles, but not so much that it distracts from the actual story. Aside from the occasion shaky camera, it’s a good job.

Little Pieces was shot in nineteen days, on a tight budget. Taking that into perspective, this film is great; but it’s still not on a desirable level. In all honesty, the best part about Little Pieces is that it showcases the talents of Adam Nelson, and it points toward more prominent work that is sure to come in the director’s future. As I mentioned, everyone successful started somewhere, and Little Pieces represents the starting point for Adam Nelson, on what appears to be a promising future in filmmaking.