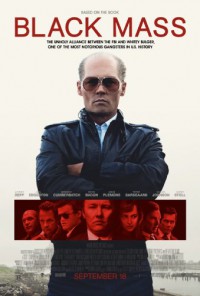 Hyping is a terrible, horrible thing that has the power to ruin a perfectly respectable film. Since mid-summer, I’ve been eagerly awaiting the release of Black Mass – carefully examining stills and reading about the progress of the film. Naturally, when the film came out last Friday I was chomping at the bit to see it; but when I did, I was disappointed to discover it wasn’t all that I’d hoped it would be. But that’s not to say that Black Mass isn’t good; it just falls short of the bar that I’d set for it. One thing I wasn’t disappointed by: Johnny Depp. Fans of the prestigious actor will love this film, because despite its flaws, Depp gives a brilliant and memorable performance.

Black Mass is based on the true story behind James “Whitey” Bulger (Depp), the leader of the small-town Winter Hill Gang in South Boston. Happily married with a son, Whitey is originally only a tiny nuisance to local law enforcement – especially when compared to the Angiulo Brothers, a crime group with ties to the Italian mafia. When Whitey’s childhood friend FBI Agent John Connolly (Edgerton) returns to town, he reaches out to Whitey with the proposal that he become an informant for the FBI. Given his notorious hatred of rats, Whitey initially refuses. But soon after, a member of the Winter Hill Gang is murdered by the Angiulo Brothers and Whitey decides to accept Connolly’s offer, telling no one except Stevie Flemmi (Cochrane), his right hand man. Almost immediately, Whitey begins to abuse the alliance, using his connections to become one of the most infamous crime bosses in Massachusetts.

The story is told in a flashback style by Winter Hill Gang members after they’ve been caught; apparently revealing information about the still at-large Whitey in exchange for reduced jail sentences. Immediately, the trend of aversion towards informants is introduced, when Winter Hill member Kevin Weeks (Plemons) insists “I ain’t no rat, Jimmy hated rats,” before beginning his tale of the criminal. Cooper really pushes this theme in the audience’s face over and over again. However, it doesn’t become tired; this technique just highlights the importance of Whitey’s hatred of rats to the story. In addition, it’s a fantastic use of dramatic irony.

The cast in general is perfect, save for Adam Scott as Robert Fitzpatrick with a completely ridiculous moustache. There’s no denying that out of all the talented portrayals in Black Mass, Johnny Depp takes the cake as Whitey. Part of what makes Johnny Depp such a talented actor is his ability to step into a role and be completely unrecognizable as anything other than that specific character. But still, he gives each character he plays a certain flair to them that’s uniquely his, and this is especially true for Whitey Bulger. Depp makes Whitey completely terrifying at some points, yet touching at others, and nails the character development. At the beginning of the film, we see Whitey as a beloved character in the eyes of his town, his family, and his friends. As his family life is deteriorating Whitey gradually becomes heartless, and Depp flawlessly shows this. If nothing else, Black Mass is worth seeing just because of him. 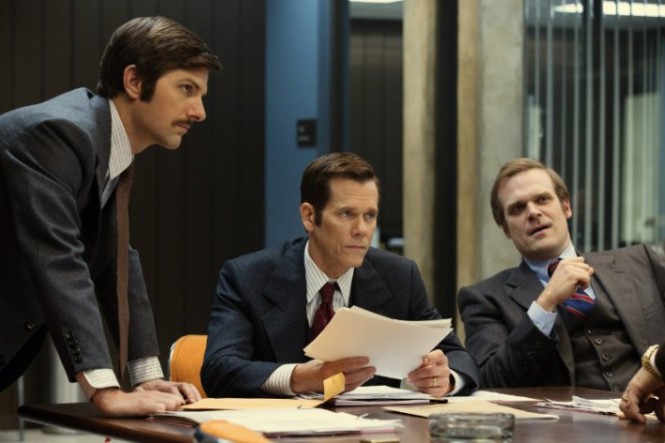 The mustache is so terrible.

Dakota Johnson does an impressive job with her role as Lindsey, Whitey’s wife. I certainly hope she continues to do films like this one, as I find her much more impressive here than in 50 Shades of Grey. Benedict Cumberbatch, Joel Edgerton, and Kevin Bacon also deliver extraordinary performances to the film, with their characters having great chemistry.

As I mentioned before, Black Mass isn’t all sunshine and daisies. The biggest flaw that keeps it from reaching its full potential is the pacing. The beginning of the film is written rather well and moves along smoothly, but the middle to the end – yikes. This is the part of the film where the action should be increasing, and people should be clinging to the edge of their seats. Instead, I found myself wondering if the film was almost over yet. The drama that’s presented is too spaced out, and every time something catches the audience’s attention, the lack of development loses it within minutes. Obviously writing an engaging plotline is difficult when you’re working with a true story, but surely some things could have been added or left out to make for a more smoothly contoured storyline. 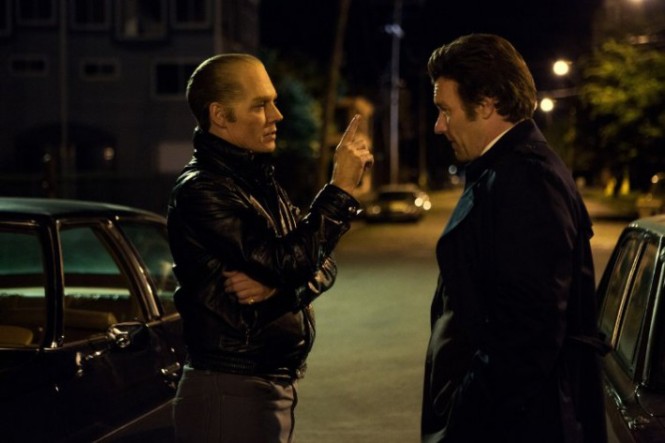 There’s no doubt that the film is a prestigious addition to Scott Cooper’s resume as a Director, and it certainly shows improvement in his skills. Dragging storyline aside, the fantastic cast and beautiful work from Johnny Depp save Black Mass from falling prey to the label of mediocrity. This performance is certainly one of Depp’s best, and although I didn’t enjoy the film as much as I’d hoped to, his role certainly makes up for that.