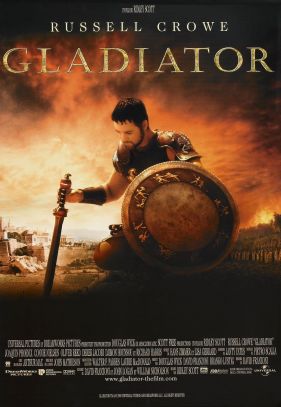 Ancient Rome is remembered for many things: the political drama (Ides of March, anyone?), the immensity of the empire, and of course the gladiator games. Ridley Scott’s Gladiator (2000) combines all three of these elements into an engaging and outstanding cross between the historical drama and action genres. The film was scored by Hans Zimmer with Lisa Gerrard and stars Russell Crowe, Joaquin Phoenix, and Connie Nielsen (full cast and crew). A story created by David Franzoni (who also took part in writing and producing the film), Gladiator takes place in 180 AD.

It is well known to the Roman Empire that Emperor Marcus Aurelius (Harris) is nearing the end of his life. After the ending of a long war, esteemed General Maximus Decimus Meridius (Crowe) only wants to return home. However, Marcus Aurelius asks him to instead come to Rome and be his successor, believing that Maximus is noble enough to restore Rome to her former Republic. When the emperor tells his son Commodus (Phoenix) that he is unfit to rule Rome, Commodus is so distraught that he kills his father and names himself the new emperor. Realizing what Commodus has done, Maximus refuses to support him and is consequently sentenced to death, along with his family. Lucilla (Nielsen), Maximus’ former lover and the sister of Commodus, also knows what her brother has done but keeps quiet out of fear. Maximus is able to escape execution, but is unable to save his wife and son. After he discovers this, Maximus is enslaved and sold to Proximo (Reed), who trains him to become a Gladiator.

With a movie like Gladiator, there’s always some level of fear that the film will rely too much on action to advance the plot. Despite this worry, writers Franzoni, John Logan, and William Nicholson deliver a fantastic script that is performed wonderfully by the actors. The scene in which Marcus Aurelius tells Commodus of his decision to have Maximus succeed him is a good example (watch the scene). Each sentence in this scene has so much purpose, and the performances from Richard Harris and Joaquin Phoenix create a heartbreaking moment.  Russell Crowe was cast well as Maximus, managing to create the image of fame and success in him, yet also keeping the character humble.

I’m not the biggest fan of choral music in movie scores, but Hans Zimmer (one of my favorites) makes it work in this. The score fits well in the film, and Gladiator’s particularly tugs on the heartstrings where appropriate. The main theme is “Now We Are Free,” but the track that really drew me in was “Am I Not Merciful?” – the gradual layering of strings is absolutely beautiful.

Some of the special effects in this movie are a bit iffy. Whenever the camera pans over the city, the whole thing looks almost like a drawing. Other aspects of the cinematography are fantastic, however. The camera movement and lighting in Gladiator are done very well, particularly in the battle scenes.

All in all, Scott’s movie has all of the elements of good entertainment. The plot is fascinating, the acting is great, the music is beautiful, and the themes stick with the audience. Gladiator is definitely a must-see for everyone…even if they see it fifteen years after its release.