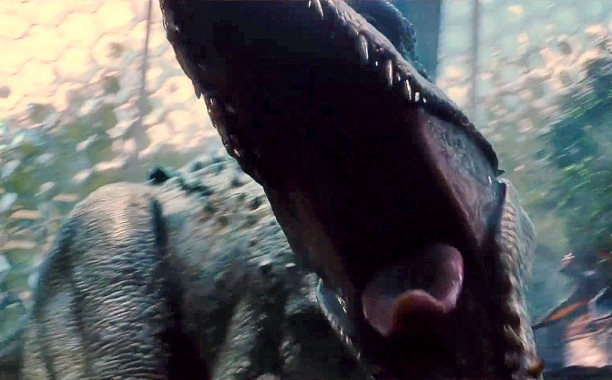 The terrifying beast from the film, created by a genetic modification.

It’s been twenty-two years since the events of Jurassic Park occurred, and the park has reopened – now called “Jurassic World.” Zach and Gray are going to visit their Aunt Claire, the operations manager of the park. Gray (Ty Simpkins) seems to be a dinosaur fanatic, running to every attraction with his enthusiasm growing each time. It’s made clear that Zach (Nick Robinson), the older brother, is unimpressed by the amazing dinosaurs and museum exhibits. He’s much more interested in every single teenage girl at the park.

Instead of spending time with her nephews, Claire (Bryce Dallas Howard) prepares for the park’s newest attraction/dinosaur that was created by a team of scientists: Indominus Rex. Claire brings in the velociraptor trainer Owen (Chris Pratt) to inspect the creature’s paddock for safety clearance before the attraction opens to visitors. Owen and Claire notice scratch marks on the walls of the paddock, making it appear as though Indominus has escaped. This prompts Owen to go inside the paddock for further examination, where he realizes that the creature has just camouflaged herself to trick the humans. Narrowly escaping a gruesome death, Owen is able to flee the paddock. But so does the dinosaur, who proves to be a ruthless machine, killing everything that moves.

If you haven’t seen the previews for Jurassic World or lack the common sense to figure out that this creation will become trouble, the name gives it away. In Latin, “indominus rex” literally means “untamable king”. The Indominus proves to live up to her name. Not only is she dangerous in her nature, she is also dangerously intelligent which proves her to be a formidable foe for the visitors and workers at Jurassic World.

Jurassic World is the only film I’ve seen directed by Colin Trevorrow, and I think that he did a good job with it. He creates a perfect balance of action, suspense, and comedy. The film’s plot is engaging and fast-paced, with the viewer being hooked in right away. Trevorrow ventures many themes with this film and begs many difficult questions, one of which being: How far will corporations go for monetary profit? The creation of a killing machine to keep profits up at a theme park provides the chilling response: too far.

Chris Pratt won my favor as the hero in Marvel’s Guardians of the Galaxy, and my adoration of him has only grown after seen him as the bad-ass, smart-mouthed but kind-hearted alpha raptor. Pratt was well cast for this role. As for Howard, I’m not sure whether I didn’t like her acting or just didn’t like her character. There was something about the fact that she was running around a forest in a pair of stilettos and a white ensemble that turned me off about her. I was surprised to see Jake Johnson in the cast, playing an operator at the park. Johnson does a great performance, providing a conscience for the characters in the film.

Michael Giacchino’s score deserves a mention; it’s spot on. The music seamlessly adds to the wonders of the setting, doubles the horror where appropriate, and reminds one of Williams’s score for Jurassic Park.

Jurassic Park is a phenomenal movie. I never saw the second and third installments, but I’ve been told that I’m not missing out. Jurassic World, however, is a worthy addition to the franchise that can be appreciated by all ages.

Owen (Chris Pratt) riding as the alpha velociraptor in his “Raptor Squad”.