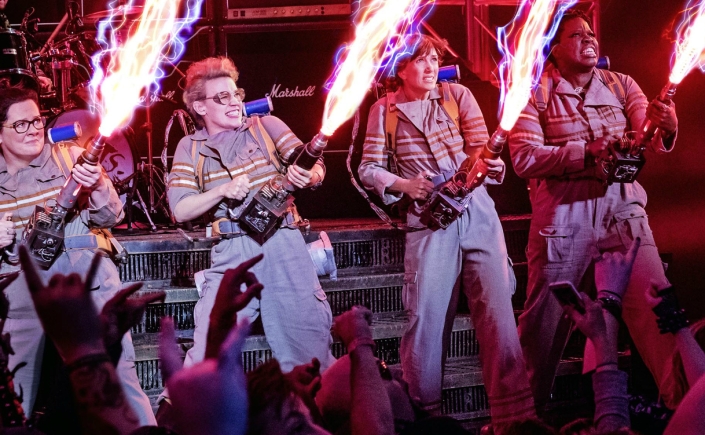 In 1998, an American made “Godzilla” film was released – and despite critics’ utter loathing of it, the film ultimately grossed $379 million. Most importantly, nobody acted like it was the end of the world. In 2016, we are supposed to be a more “progressive” nation, but people can’t stomach the idea of the remake of “Ghostbusters”. Yes, it’s a remake. No, it’s not better than the 1984 “Ghostbusters”. But, it’s entirely undeserving of all the rampant criticism it’s been receiving, from people who haven’t even seen it. And for the record – it’s a million times better than “Godzilla”.

“Ghostbusters” (1984) is an iconic movie, holding an irrevocable place in the history of cinema – and no one would ever try to dispute that. Paul Feig’s “Ghostbusters” especially isn’t; in fact, Feig is paying homage to the original, and he does a great job of it too.  The plot of the film is funny, and while it follows the basic formula of the original, the specific details of it are unique. An amazing cast ties this movie together, and while it doesn’t outshine the 1984 film, it succeeds as a complement to it.

Erin Gilbert (Kristen Wiig) is a successful physicist who is up for tenure at Columbia University, when a book about paranormal phenomena that she co-authored in her younger days comes back to haunt her. Fearing that her colleagues will discover the book, Erin sets out to beg her former friend and co-author Abby Yates (Melissa McCarthy) to remove it from the public eye. Instead, Erin, Abby, and nuclear engineer Jillian Holtzmann (Kate McKinnon) find themselves interacting with other-worldly spirits, and when Manhattan becomes the site of a ghost invasion they pair with subway worker Patty Tolan (Leslie Jones) to save the world.

The plot follows the same basic formula as the 1984 “Ghostbusters” did, but Feig manages to sift in enough originality that it doesn’t feel like a repeat. While the movie starts out with a scientist who is skeptical about the paranormal and two who are whole-hearted believers, the backstories for these characters are entirely fresh. Those who claim that “Ghostbusters” is a copy of the 1984 version with little different than a female cast have no merit to their arguments. It’s a remake – so no, it’s not going to be brand new content. While some remakes do have completely different plots, these make them a bigger risk factor. By sticking with what works, and some light and flattering imitation of the original “Ghostbusters”, Feig avoids the pitfalls that come with trying to entirely restructure a classic film. Oh – and the plot is excellent, too. It’s fast-paced and entertaining, akin to that of the predecessor.

The cast for “Ghostbusters” is a handful of some of the best female “Saturday Night Live” cast members of all time – it almost feels like Tina Fey and Amy Poehler should be on the screen right alongside them. Kristen Wiig and Melissa McCarthy are reined back from their full potential as comedians, but Leslie Jones and Kate McKinnon are full frontal. McKinnon especially is amazing, dazzling with the weirdo

personality she has become known for on “SNL”, and it’s hilarious. I won’t go on a feminist rant, but I do want to point this out: McKinnon plays a strange, goofy, and lovable character. In the past, this kind of role has been strictly male, and when the character has been female, she’s an outcast (basically, you can scratch “lovable” off the list). It’s not fair that only male characters are allowed to be eccentric; thus it’s incredible that McKinnon dominates her oddball persona so well. From an equal rights standpoint, “Ghostbusters” is taking a step in the right direction.

The only real problem with “Ghostbusters,” is that it’s not the original – Ivan Reitman set a bar that’s impossible to surpass. However, it’s unfair to begrudge an otherwise excellent film simply because it’s a reboot, so people should give this film the respect that it’s due.  A good remake brings something new to the picture, while respecting the source material – and that’s exactly what “Ghostbusters” does.